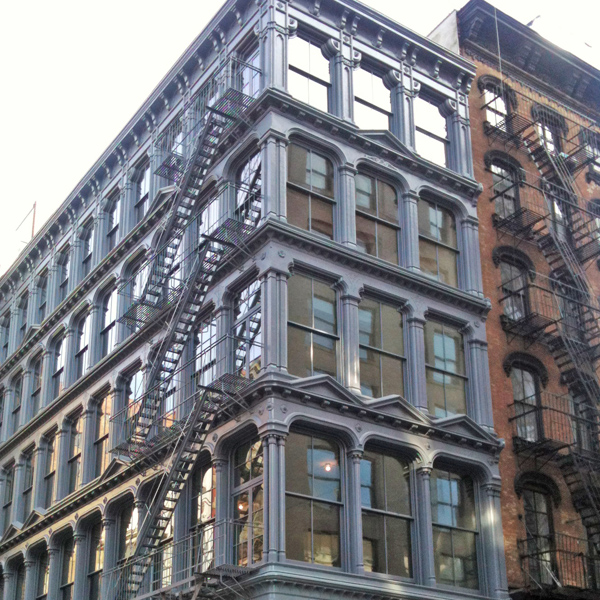 The two sided, five story, 1870 façade at this address is attributed to Nicholas Whyte, architect. Its successive rows of slender cast iron columns exhibit the tremendous strength of cast iron under compression. The material is used as “cast iron for cast iron’s sake” and not in imitation of stone. Extremely large glass window panes foreshadow the glass curtain walls used on many of today’s modern towers. 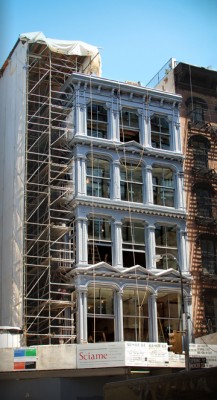 Originally the structure was most certainly a commercial building with its sidewalk entrance to a large basement below grade. In 1968 sculptor Donald Judd converted it into a studio and home for his family. It is considered to be the birthplace of “permanent installation,” now a hallmark of contemporary art, as well as an inspiration for much of Judd’s work.
Judd’s concept of “permanent installation” centered on the belief that the placement of a work of art was as critical to its understanding as the work itself. Judd’s first applications of this idea were realized in his installation of works throughout 101 Spring Street. His installations of artworks, furniture, and museum-quality decorative objects in this historic building strike an admirable balance between respect for the historic nature of this cast-iron landmark and Judd’s innovative approaches to interior design.

All works on view at 101 Spring Street remain as they were installed by Judd prior to his death. Throughout his writings, Judd identifies the installations at 101 Spring Street as the true source of permanent installation as a practice. In his essay “101 Spring Street,” he wrote, “I spent a great deal of time placing the art and a great deal of time designing the renovation in accordance. Everything from the first was intended to be thoroughly considered and to be permanent.” The dialogue that developed between the building and the artworks within is still palpable to visitors today, who are able to experience firsthand Judd’s attention to spatial relationships and the placement of art within the building. As one of the founding sites in the program of Historic Artists’ Homes and Studios for the National Trust for Historic Preservation, 101 Spring Street is the only intact, single-use cast-iron building remaining in SoHo. This distinction has earned it the highest designation for national significance as part of the SoHo Historic Cast-Iron District.

The Judd Foundation’s mission is to maintain and preserve Donald Judd’s permanently installed living and working spaces, libraries, and archives and promote a wider understanding of and appreciation for Judd’s artistic legacy by facilitating public access to these spaces and resources. As a result, the property is undergoing what is perhaps the most thorough restoration of an historic cast iron façade to date. Sciame Construction with architect Walter Melvin and Associates and Robinson Iron carefully cataloged and removed most of the cast iron cladding from the two facades. New attachment brackets were designed and installed to support the restored and reinstalled cast iron. Even the famous vault lights located around the perimeter sidewalk are being restored to allow light into the basement area as was the original intent. To learn more about Donald Judd and the Judd Foundation’s programs visit: http://www.juddfoundation.org.