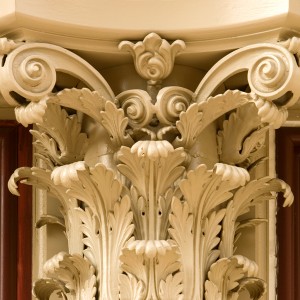 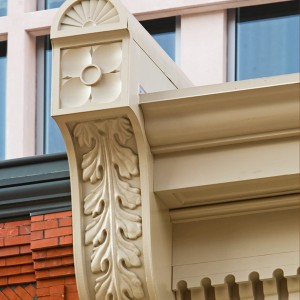 Robinson Iron designed and fabricated an entirely new cast aluminum façade as part of this trophy-class project located in the heart of the East End. The complex is at the heart of the resurgence in the area creating new and unique office and retail opportunities. Local historic patterns were used to suggest the appearance of an older cast iron façade and to relate it directly to the newly restored cast iron façade at nearby Penn Quarter.

One unique feature of the project can be found in the innovative connective details of the light weight aluminum façade to structural steel supports. Engineer Bobby Patterson of Robinson’s design team built in maximum flexibility to allow for a better fit while installing in the field. According to Bobby, “Typically historic metal facades were connected to masonry walls. As the brick was laid cast iron brackets were inserted into the mortared brick bearing wall. The ornamental panels were then attached to the brackets with mechanical fasteners creating the building’s outer skin. A cast iron storefront could be designed, cast and erected in half the time it took to design, quarry and erect a stone structure. Attaching the new aluminum façade to a steel structure resulted in a lighter assembly, greater strength and an increased ease of maintenance.”